Where I (successfully?) attempt to reverse engineer the relative weights that the website metacritic assigns to movie critics.

metacritic is a popular site that computes an aggregate metascore for each movie. The metascore is a weighted average of individual critic scores. The metacritic FAQ Page says:

Q: Can you tell me how each of the different critics are weighted in your formula?

That sounds like a challenge to me. Using standard machine learning/optimization techniques, we should be able to tell what critics are more important than others. In fact, the same techniques should also allow us to correctly predict the metascore for any new movie (given the individual critic ratings). This post describes my attempt to build such a system.

Note: All related code is available on my github.

We introduce some notations and assumptions about the problem:

An obvious definition of is simply a weighted sum:

But there is a problem with this definition. Remember: Not all critics rate all movies. In other words, the summation above may be invalid, since not all values are necessarily defined. How do we deal with this incomplete matrix ? My best guess is that metacritic normalizes the metascore over the available critic weights. For example, assume that the (excellent) movie Ex Machina has the index in our data set. Assume that only two critics, with weights and have currently rated this movie. We denote their ratings and respectively. The metascore for this movie is then

In fact, the metacritic FAQ page says they wait until a movie has at least 4 reviews before computing a metascore. So they want at least 4 defined values for a given . Lets define the following additional variables:

Note that and are both matrices, but unlike , they are fully defined.

Using these, we modify the definition for :

How does this function vary with (once we fix the values)? I wrote up a little script to plot for the example involving the movie Ex Machina (I fixed the critic ratings to and ; I know. Stupid critics!) The following image of the plot hopefully makes it clear that is not linear in . But the function is still smooth (i.e., differentiable). 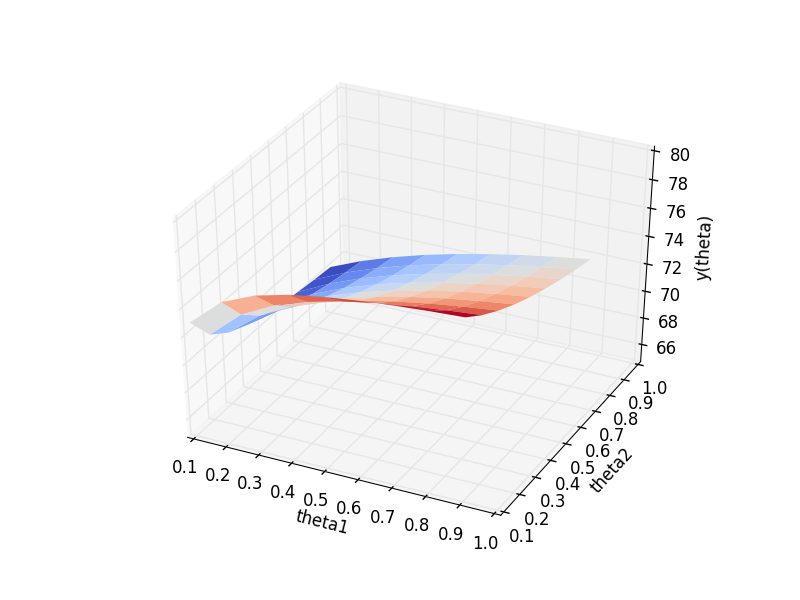 Now consider the -vector . This vector is a measure of how off the predictions are from actual metascores for a given . We will try to find a that minimizes the value of the function , where represents the norm. Formally,

This is a standard constrained minimization problem. Our expectation is that any solution of the above system (a) fits the training set well, and (b) also predicts metascores for new movies. Notice that is not a linear function of because isn’t either. So, we have to use a nonlinear solver.

With (most of the) annoying math out of the way, lets write code! The implementation pipeline consists of the following stages:

It turns out that a Makefile is really well suited to building these kinds of pipelines, where each stage produces a file that can be used as a Make target for that stage. Each stage can be dependent on files produced in one or more previous stages.

Unfortunately, metacritic does not, as far as I know, have any API’s to make this data available easily. So I periodically scrape metacritic’s New Movie Releases page for links to actual metacritic movie pages, which I then scrape to get the overall metascore, and the individual critic ratings.

I used a combination of xpathtool and the lxml Python library for the scraping.

The output of this stage is a Python cPickle dump file that represents a dictionary of the form:

where individual_ratings is itself a dictionary of the form

I know cPickle is not exactly the most portable format, but it works well at this early stage. In the long run, I want to persist all of the ratings data in a database (sqlite? Postgres?).

We first eliminate from our data set the long tail of critics who’ve rated very few movies. Not only are these critics not very influential to the overall optimization routine, eliminating them also helps reduce (the matrix width). Accordingly, there is a configurable rating count threshold, currently set to . We do one pass over the ratings data and construct a dictionary of the form:

We then do another pass through the data and remove ratings from critics whose movies_rated value is lower than the threshold.

The second preprocessing step is to construct the and matrices, which of course is a simple matter of programming. I store these values as numpy matrices.

This is straightforward. I use a configurable training_frac parameter (a value in the interval ) to probabilistically split the cleaned up data into a test set and a training set.

There are numerous “solvers” available for constrained optimization problems of the type we described above, but not all of them are freely available.

I tried the following two solvers, available as part of scipy.optimize:

Note that (and therefore ) satisfies the differentiability requirement of SLSQP.

Also, COBYLA does not allow you to specify bounds on values or equality constraints. So, we employ a common technique in optimization formulations, which is to push the constraints into the objective function. Consider the “tub” function defined as:

Our modified objective function (for use with COBYLA) becomes:

where and are configurable weights that decide how much we should penalize the optimization algorithm when it chooses:

Setting both and to 0 reduces our objective function to its original form, so we can use the same function for both solvers by simply tweaking these weights.

Before I actually launch into details, I should note the following issues right at the outset:

Most of the times, both routines finished their iterations and failed with errors of this form:

If you have experience with the numpy optimization library, I’d love to hear about suggestions you may have on how to deal with these errors.

Perhaps more interestingly, in spite of the above issues, the learned values were still able to successfully predict metascores for movies in the test set.

After removing ratings from insignificant critics, I constructed a training set of about 2800 ratings of 190 movies by 188 critics.

The following table lists the top 20 critics by weight learned using the above training set with each optimization routine. Note that the weights are expressed as a percentage of the weight for the top critic in each list. Interestingly enough, both algorithms think Mike Scott of the New Orleans Times-Picayune is the metacritic MVP. So, for example, according to SLSQP, a review by Justin Lowe carries only 95% of the importance that is given to a review by Mike Scott.

I should clarify that the top 20 list can change from one run to the next, since it depends on the training set chosen (which is at random).

Next, we show a few sample predicted metascores:

With a test set of size 60, the movie predictions by the two algorithms had the following RMSE values: